Ross & the team at AAA Mechanical are fully qualified to convert your vehicle to LPG.

Defend Yourself Against Rising Fuel Costs

LPG Gas Conversions Book Your LPG Gas Conversion LPG can be up to 80c a litre cheaper than unleaded petrol The Government does not charge exise tax on LPG. And you really see the difference it can make when you look at the savings over a year. For example, if LPG averaged 68.9 cents per litre, while unleaded petrol averaged 145.9 per litre, a Holden Commodore driver travelling just 20,000 kilometres a year on LPG would save $1,384 – the equivalent of 27 per week.

How much can I save using LPG?

Save $$ On Fuel Costs
With the price of petrol continuously on the rise, LPG Conversion is a real alternative as LPG can cost up to 60% less than petrol. The benefits you get from converting will depend on your car’s fuel usage; the number of km’s you travel each year; how long you plan to keep the vehicle and the actual cost of conversion. LPG gas conversion can also extend your car’s engine life as well as reduce its exhaust emissions!

You Can Still Continue To Use Petrol

It does not cost any more money to have your car converted to dual fuel than it does to have it converted to Liquid Petroleum Gas only. Dual fuel gives you the flexibility being able to choose between the two fuel types.
The comparison below shows two commercial vehicles both travelling the same speed and distance. The vehicle using LPG auto gas demonstrates that you can save every time you go to the service station to fill up. 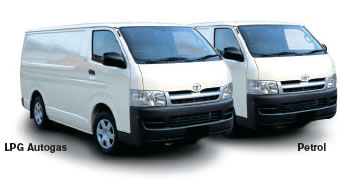 How Safe is LPG?

LPG is arguably safer than any other form of fuel used to power motor vehicles. What’s more, LPG tanks are much stronger than conventional petrol tanks, while strict national standards and state government regulations control the installation and use of LPG.
Travel to any major city or town throughout Australia and you’ll find LPG. For example, a motorist driving along the Pacific Highway from Sydney to Brisbane would come across an LPG outlet on average every nine kilometres. In fact, LPG is readily available at more than 3,200 service stations around Australia -and the number is growing constantly.

The latest LPG injection technologies, available in both factory and retrofit installations, ensure that LPG provides performance and fuel economy comparable with contemporary petrol powered engines. (In addition, using LPG reduces engine wear – which is probably one of the reasons why it’s the preferred fuel in around 15,000 taxis). Ross and the team at AAA Mechanical in Castle Hill, NSW are experts in LPG Conversions. LPG Gas Conversions

AAA Mechanical for your Car Servicing and Car Repairs